Myrrh is a resinous secretion of the trees, which belongs to Commiphora species and Burseraceae family. Eastern Africa, Arabia, and India are the native place of Commiphora species and more than 150 different variety of this same species tress have abundantly grown in this area. Commiphora myrrha is one of such tress which has a rich source of Myrrh resin. The term Myrrh may derive from the Arabic word, 'murr' which means bitter. Native users have collected the resin from myrrh by making incisions into the bark. A yellowish oleoresin exudated from these bark incision marks. Exposure to air makes the resin dry and hardens, which then gradually turns to reddish-brown.

Mechanism of action and Phytochemicals present in Myrrh

Myrrh containing resin, which is also known as myrrhin contains 23% to 40%. Myrrh also contains gum and the composition is almost 40% to 60%. The essential oil present in Myrrh is volatile. Myrrhol (the concentration varies from 2% to 8%) is one of the primary volatile oil. A bitter constituent of myrrh belongs to 10 to 25%.

The immunomodulatory effect and wound healing property of myrrh are obtained due to treatment with this herbal remedy significantly increase the total WBC count. The elevation of leukocyte, monocyte, lymphocyte, eosinophil, and neutrophil is gradually elevated during the treatment period with myrrh. Animal researchers concluded after conduction of a research study on rats that Myrrh has a potent immunomodulatory effect.

The anti-inflammatory effect of Myrrh occurs due to interference with cell signaling pathways and alter the release of selective cytokines.

The cytotoxic effect of myrrh against tumor cells leads to a reduction of one/more leukocyte cell types before instigation of injury. A recent research finding reported that the gum present myrrh has a potent anti-cancer against neuroblastoma cells.

Myrrh also has ulcer protective effect due to raising of mucus production at the gastro-intestinal site and also increase the non-protein sulfhydryls level at the ulcer site to heal the wound. 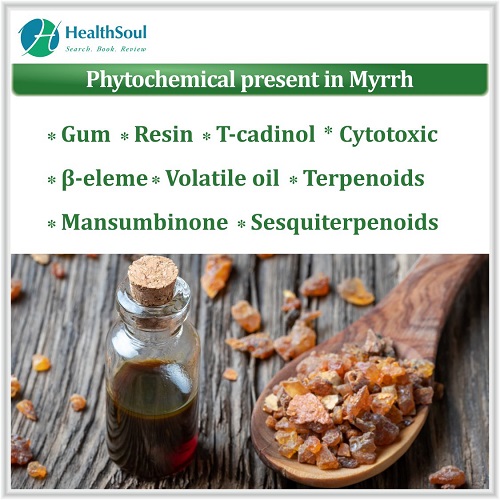 Extract of Myrrh having a high concentration of its bioactive phytochemical furanodienes has the potency to alleviate a headache. A clinical trial conducted in both male and female participants reported that Myrrh reduces the pain score of the subjects with a headache. This clinical trial also described that a minimum dose of Myrrh is effective to control headache.

Phytochemicals present in Myrrh is considered as a nutraceutical. Combination of Myrrh with other nutraceuticals obtained from different natural sources like ginkgo extracts Q10, vitamin B6, and riboflavin recommended for more than 6 months period can significantly reduce the headache intensity and frequency.

Application of Myrrh extract to treat joint pain including osteoarthritis is an effective treatment. The analgesic property of Myrrh not only effective to control pain in the joints also reduces the stiffness. Therefore, patients with mild osteoarthritis get benefitted by application of Myrrh oil. Calcium is an important trace mineral required for bone health. Myrrh extract contains a sufficient amount of calcium which also helps to maintain bone health.

Muscle ache with joint pain symptom is a common distressing condition often associated with other ailments like a fever. This type of pain also occurs after strenuous physical activity. A clinical trial result reported 400mg of Myrrh extract is effective to treat muscle ache.

Apart from these, essential oil collected from myrrh has a potent analgesic property and combination of Frankincense essential oil blended with Myrrh oil provides a synergistic effect in pain-relieving effect.

Back pain becomes a common pain symptom of this generation may arise due to improper postural issues, or strenuous physical activity. Instead of using frequent synthetic analgesic medication, Myrrh extract is an effective alternative treatment of lower back pain. The clinical trial result reported 400 mg of Myrrh extract is effective to treat the condition.

The analgesic property of Myrrh is effective to treat menstrual cramps or dysmenorrhea if the symptom is not associated with an organic cause. Myrrh extract with 200 mg dose is an effective treatment to control dysmenorrhea. Sufficient amount of iron is also present in Myrrh, which may prevent amenorrhea.

Curzerene and sesquiterpenoids present in Myrrh have antibacterial, antifungal, and anesthetic property, which protects against infection.

Prepare a soft gelatin capsule by encapsulating 2 drops of Oregano oil and Myrrh oil along with with 4 drops Melaleuca and Coconut oil. Take this combination therapy trice a day with a meal.

Toenails infection: Prepare a herbal preparation by adding 1 drop of Oregano oil, 2 drops of Myrrh and 4 drops of Melaleuca and Lavender oil. Apply this combination therapy on around the nail bed and on the top of the nail twice a day until the infection subsided.

The mast cell stabilizing property of Myrrh is effective to control the allergic reaction.

The potent antioxidant property of Myrrh is an effective remedy for inhibiting tumor growth. The bioactive phytochemicals including Limonene have effective to protect against many cancer due to its chemopreventive property. Experts also recommended that the potent anticancer property of Myrrh is a promising candidate for the combination of chemotherapy to treat multidrug-resistant cancer. The nutrient like Selenium sufficiently present in Myrrh extract, which also provides an anticancer property.

Experts often recommended chromium supplement to individuals who have a higher risk to develop diabetes, as deficiency of chromium has co-relation with diabetes prevalence. Myrrh has a sufficient amount of chromium in it and may effective to prevent diabetes.

Myrrh oil has an anti-inflammatory effect and helps in skin rejuvenation and prevent aging. 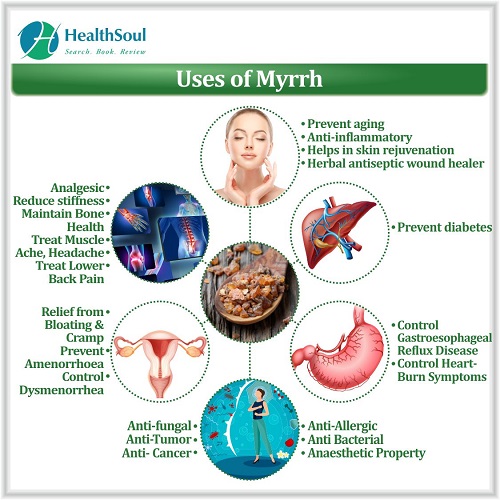 Side Effects and Precautions

There is minimum research information available on the side effect of Myrrh. However, a research result indicates over-dosing of Myrrh can cause a hepatotoxic effect. Experts recommended not to apply myrrh oil directly on the skin to avoid skin rash. More than 2 to 4gm of Myrrh administration can cause kidney problem and also change the heart rate. Pregnant and lactating mother should avoid oral ingestion of myrrh containing product due to lack of safety analytical study. The blood sugar lowering property of Myrrh may cause a sudden lowering of blood glucose level, which may affect the diabetic patients. 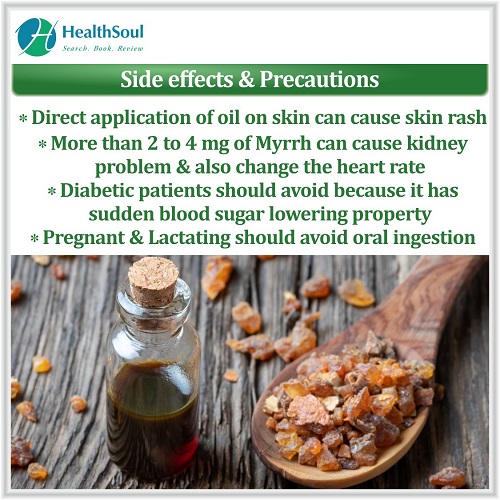