When Valerian root is traditionally used to treat sleep disorders. Modern herbal sedative medicines also contain Valerian root as a primary ingredient. The root is collected from the Valeriana officinalis plant, belongs to the Valerianaceae family. Garden Valerian, Garden Heliotrope are common names of Valeriana officinalis. This hardy perennial flowering plant abundantly found in Europe, some Asian countries. Eastern North America also cultivate this plant. There are 250 species of plants belonging to  Valeriana genera. [1] But, Valeriana officinalis root is most widely studied and possesses many therapeutic benefits. An unpleasant odor of this root is distinct.

What are the Phytochemicals present in Valerian root?

The different bioactive phytochemicals like volatile oil,  flavanones, valeric acids,  alkaloids, and some other chemical constituents have identified in the chemical analysis of the valerian extract. Acevaltrate, isovalerate, valtrate, and valepotriates are different chemical substances are present in Valerian root. Actinidine, catinine, valerianine, and valerine are some specific alkaloids present in this plant part. Acetoxivalerenic acid, valerenic acid are two active constituents of volatile oil. Hesperidin, 6-methylapigenin, and linarin are Valerian root containing flavanones. [1,2] 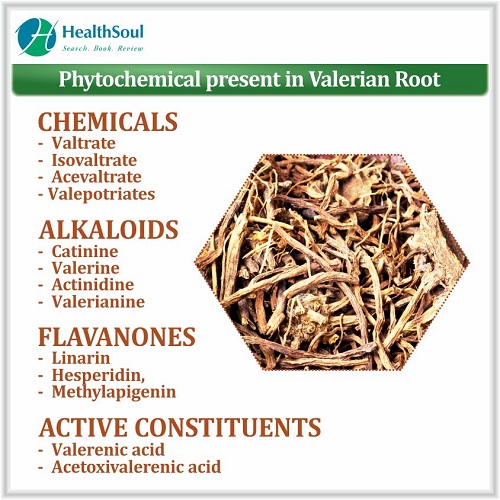 What is the Mode of action of benefits of Valerian root?

It is still not fully understood how Valerian root exerts a sedative effect. Researchers assumed from different preclinical and laboratory studies that a combination of phytochemicals present in valerian root is synergistically imparted the sedative effects.

It has proven that valerenic acids and its derivatives and valepotriates present in Valerian root able to comprise a sleep-inducing effect. However, these components being unstable in exposure to environmental conditions.

Research experts suggested that Valerian root may increase the amount of GABA (gamma-aminobutyric acid)neurotransmitter in neuronal junctions from the brain and then block the uptake of this neurotransmitter into the nerve cells. Valerian root prevents enzymatic degradation of GABA. Moreover, Glutamine one of the active ingredient of aqueous extract of Valerian root blood-brain barrier and increase the amount of GABA. Significant enhancement of GABA in the brain induces sleep and also treat anxiety and mental stress condition. [1]

What the different forms of Valerian root and benefits?

Valerian Tincture beenfits: Herbal practitioners recommended this preparation with a dose of 2 to 4 ml at bedtime.

Valerian Root tea benefits: This is prepared by adding one to two teaspoon of valerian root into one cup of boiling water. Cover the vessel and wait for 10 minutes. Then enjoy the drink before bedtime.

Valerian root essential oil benefits: This can be used as inhalation therapy or you can add 6 to 8 drops of oil in the bathtub and emerge the body to enjoy its relaxing effect. This oil also uses as a massage oil. Experts recommended 10 -18 drops of Valerian essential oil per 30ml of carrier oil for massage therapy. Some topical preparations also contain this oil. [2] 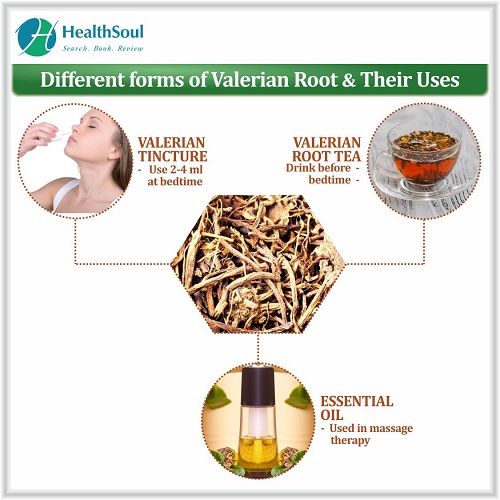 There are many scientific studies already conducted to prove the sleep-inducing effect of valerian root. All these study results showed positive results. The benefit of this herbal remedy does not only lessens the time to take fall asleep but also improves sleep quality by regularizing the sleep cycle. This benefit was obtained by increasing the amount of GABA neurotransmitters in the brain. A research study also showed valerian root extract could regulate enzyme activity by acting on specific gene expression. [3] A human study conducted in Foellinge Health Centre in Sweden reported that individuals suffered from poor sleep had got benefitted by valerian preparation. Forty-four percent of study percipients admitted that consumption of valerian products improve their sleep quality. [2] Apart from these almost eleven other placebo-controlled randomized clinical trials also conducted to check the efficacy of valerian as the sleep-promoting agent and treatment ability of sleep disorder. But none of these studies reported any withdrawal effect. This is really beneficial than other synthetic sedative medications, which have many side effects.[1]

The neurotransmitter GABA has a stress-relieving effect and possesses anxiolytic effects. The bioactive phytochemicals such as The valerenic acid and valerenol present in Valerian root have central nervous system stabilizing effect and fight against anxiety. The enhancement of  GABA levels in the central nervous system exerts a mental as well as physical relaxing effect. This herbal remedy helps you to deal with regular stress levels. [2] Traditionally herbal therapists recommended that combination therapy of valerian with St. John's wort and passionflower for anxiety disorder. The human trial result also showed that valerian could reduce the dose of synthetic medications like diazepam in combination therapy. It has also proven from another clinical trial that valerian decreased arousal feelings. [4]

Valerian can reduce pain intensity and acts as a natural analgesic due to a direct effect on the nervous system. The Indian Journal of Experimental Biology research group conducted an animal study and the research result showed that not only volatile oil constituents but whole valerian plant extract has a significant analgesic effect on the animal subjects. A combination of valerian volatile oil constituents with aspirin improves the pain-relieving effect of aspirin. All these findings supported that Valerian has a good analgesic property. [4]

The sedative effect of the Valerian root naturally imparts muscle relaxing effect. This herb has an antispasmodic effect, which helps to relieve menstrual cramps. Islamic Azad University in Iran conducted a randomized double-blind placebo-controlled study. The result of this study reported that the uterine muscle contraction during the menstrual cycle could be eased by using Valerian products. 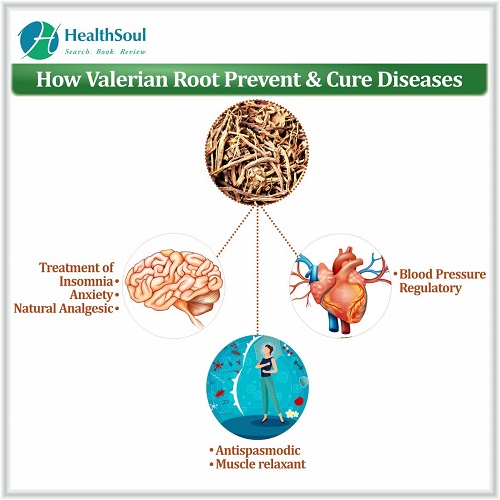 According to Commission E monographs, valerian is safe to use. It does not cause any contraindications. Side effects of Valerian are rare. Two clinical report findings documented that large multiple-dose of Valerian may cause migraine, dizziness and gastrointestinal disorders. However, these effects not common with single, repeated-dose administrations. [4] Experts not suggested to use Valerian supplement for the long term, as it may cause withdrawal symptoms.  [2]

Experts suggested Valerian should not be administered with alcohol, though no specific adverse effect has found yet. Combination therapy with synthetic sedative medications like benzodiazepine can cause withdrawal effects. Therefore, avoid to take this combination without a doctor's prescription. [4]

The recommended dose of valerian root extract is 300 to 600 mg per day to treat insomnia. 2 to 3 g of dried valerian root need to add in hot water and wait for 15 minutes. Then take this drink 30 minutes before bedtime. [4]

Valerian supplement is not recommended for pregnant and lactating women. [2] 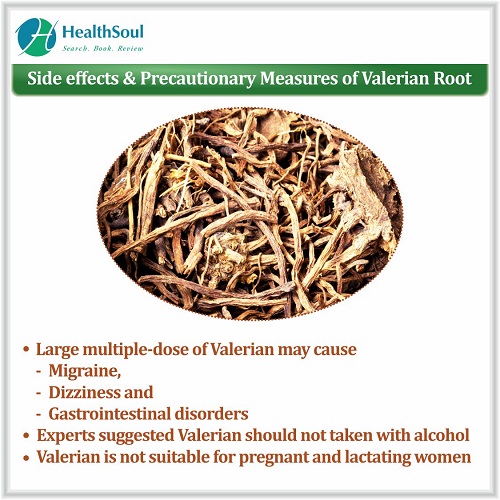