If the idea of retiring early sounds good to you, there’s a good reason.

In fact, a 2017 study by the University of Amsterdam even found that early retirement can actually lead to a longer life. The study, published in the journal Health Economics, researched what happened after some Dutch civil servants, age 55 or older, temporarily qualified for early retirement back in 2005. Their findings indicated that those men who retired early decreased their likelihood to die in the next five years by 2.6 percentage points compared to those who did not retire. (Not enough women qualified for the study.)

Several additional studies from around the globe, including Israel, England, Germany, and other European countries, have determined that early retirement has several health benefits. For one, a U.S. study determined that being retired for seven years can help reduce the chance of getting a serious disease – such as diabetes or heart conditions – by 20%. 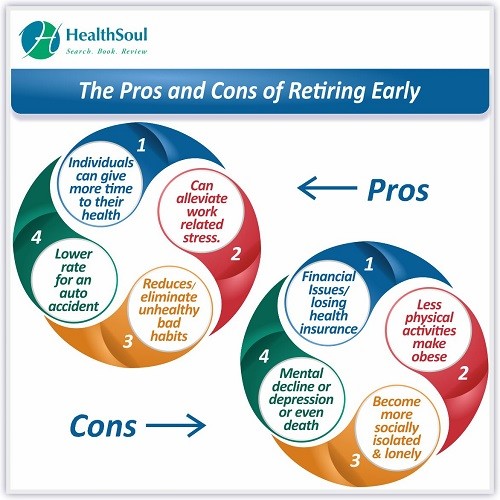 Here’s some potential reasons why:

1. Early retirement gives individuals more time to invest in their health. This may mean anything from sleeping more, exercising more, or even just being able to go to the doctor as soon a health problem arises.

2. Retiring can alleviate work-related stress. Too much stress can lead to hypertension, which can lead to multiple serious health problems. In fact, the Dutch study found that early retirees were significantly less likely to die from cardiovascular disease or stroke.

4. Commutes to and from work put individuals at greater risk for an auto accident.

Not everyone who retires early benefits, however, and in some situations, early retirement even makes health worse.

For some, stress is worse – or at least different – due to new financial issues that come from not receiving a full paycheck or, in some situations, losing health insurance.

Some types of work involve a lot of physical activity, and retirement can actually reduce that. One study, in fact, determined that people who retired from physically strenuous jobs — such as construction or landscaping — were more likely to become obese after retirement.

Another negative is that work generally provides a sense of purpose and retiring can take that away. Retirees also can become more socially isolated and lonely. A 2008 study in Southern Economic Journal found that poor health was more marked among unmarried retirees who reduced their physical activity and had less social interaction. Both a loss of purpose and social isolation can lead to illness, depression, mental decline, or even death.

WHAT YOU DO IN RETIREMENT MATTERS

How you use your retirement time can make a big impact on whether early retirement is a positive or negative experience.

Being physically active is particularly beneficial to help prevent disease and reduce the risk of death. Getting more sleep is another benefit, as is working around the house and gardening.

Volunteering – especially if it’s a cause you’re passionate about – is a good way to keep your mind active, provide a sense of purpose, and help maintain social interactions. These have all been found to have health benefits such a having a healthier heart and reducing the risk of dementia.

All of these ideas can not only make retirement a more rewarding time, but they can also keep you healthier during your golden years.

In our daily life, at least one, and most times more, the occasion calls for us to negotiate. Often these situations are rather simple and do not require adv...

As the Coronavirus pandemic continues to sweep across the globe, people are dealing with many fears surrounding their senior relatives. We know that those ov...