With a population of just under 6.5 million in 2015, Sierra Leone ranks 107th in the world by population and 121st by total area. The official language of Sierra Leone is English. The currency is the Sierra Leonean leone.

Sierra Leone has about 80 hospitals, both public and private. Thirteen health districts provide primary care, delivered at three levels based on population size: maternal and child health posts at village level (less than 5,000), community health posts at small town level (5,000-10,000), and community health centers at chiefdom level (10,000-20,000).  Secondary care is available at district hospitals. Tertiary care is provided at regional and national hospitals. However, for rural communities, physical distance to these facilities is a major obstacle.

International charities like the Red Cross and foreign governments opened temporary hospitals to help with the Ebola outbreak and damage done by the 10-year civil war; many of these are still in operation. In addition, traditional healers, especially birth attendants, provide a significant amount of health care at the community level.

Private facilities are overseen by individual owners and/or board of directors, and are mainly in urban areas. These facilities offer mostly curative care for inpatients and outpatients on a fee-for-service basis, which usually the poor cannot afford. 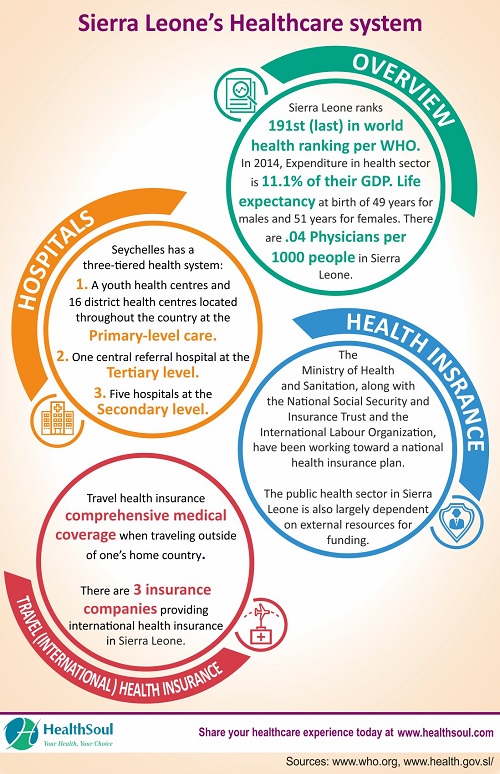 The Ministry of Health and Sanitation, along with the National Social Security and Insurance Trust and the International Labour Organization, have been working toward a national health insurance plan. Meanwhile, health care in Sierra Leone is mostly funded from private, out-of-pocket payments, with each district setting their own fees. The public health sector in Sierra Leone is also largely dependent on external resources for funding.

Since April 2010, the Free Health Care Initiative has made healthcare entirely free for pregnant women, lactating mothers, and children under age 5.